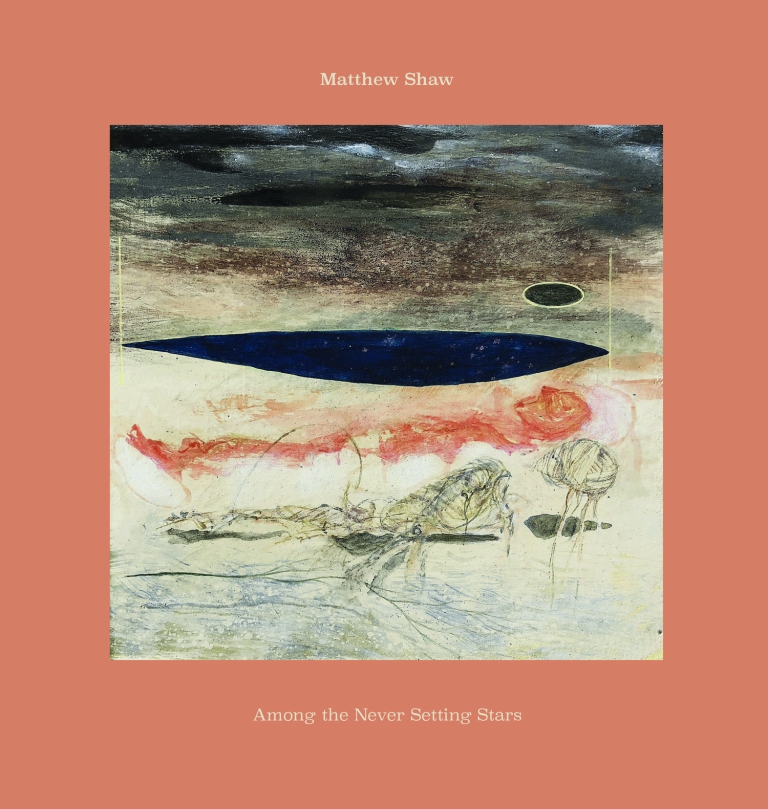 Among the Never Setting Stars is the debut lp from Dorset based artist Matthew Shaw.

Following a series of cd & cdr releases on various labels, home made art editions and a 7″ ep on sonic Oyster records.

The artwork is a painting By Brian Catling (RA) titled Transi.
The painting deals with the same theme as the lp; Life, death, and renewal moving in cycles. 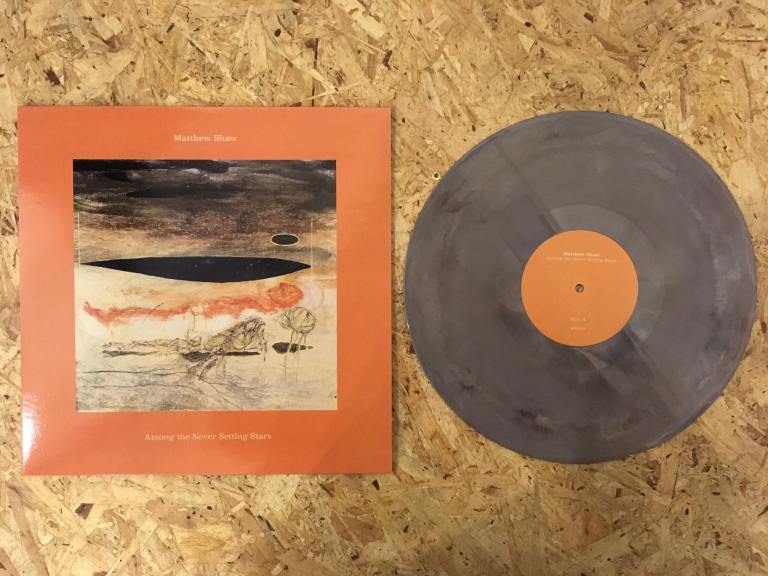 Coming complete on Galaxite Stone coloured vinyl, Matthew’s Shaw’s debut album is an artful adventure into the possibilities of drone, keyboard washes and soundscape in a stunningly effective and addictive trip that combines the deep England of weather-beaten landscape, pre Christian pagan rocks, occult shapeshifting and beautiful drones that shiver deep into the ancient land that is sometimes obscured by the garish rush of modernity.

After a few years of various underground seven inches and esoteric releases this is the first true statement of intent from Shaw and captures the perfect melancholy of the dark water island we live on in big sky pieces that are built around crystalline keyboard drones and six ambient pieces reflecting the title of each piece – titles that combine to create a short piece of prose.

A truly evocative music and an oral landscape to get lost in, this album is both modern and ancient and taps into the deep and ancient vibrations of our permanently misunderstood island and its never-ending confusion and is a meditation on its true soul hidden away from the megaphone fake patriots and the worn out cynics. It’s amazing how much you can say in a couple of notes and creating atmosphere out of the electronic and ancient out of the digital this is both ambitious and in danger accidents and yet Shaw avoids all this in a mature and enticing work.

The album’s artwork continues the deep themes of the release and is a painting By Brian Catling (RA) titled Transi. The painting deals with some of the same themes, life, death, and renewal moving in cycles.

It’s a 360 trip into the heart of a very British dusk darkness and a zen trip into the soil that made us and also a compulsive and addictive listen.

Dorset-based artist Matthew Shaw has filtered loss and the Cornish landscape into one of the ambient releases of the year. Brian Coney speaks to him about drone, sonic economy, recording in ancient sites, hallucinating Eno and more

A release partially inspired by what might well have been the hallucination of Brian Eno’s Discreet Music during a hospital stay, Among The Never Setting Stars by Dorset artist Matthew Shaw is as singularly regional and downright gossamer as ambient comes in 2018.

Born from self-limitation, and informed by the ancient Cornish landscape, his own poetry and the passing of three close friends during its recording process, it’s a richly rewarding, multi-part drone paean stemming directly from years of recording in various locations in Cornwall featured in Ithell Colquhoun’s surrealist paintings.

Though poetry and place now gives rise to much of Shaw’s equal parts transformative and transporting craft, he spent years playing in various Riot Grrrl and punk outfits. Residing in – and exploring on foot – the sacred sites and more secluded topography of Dorset for two decades has seen Shaw, who is also a painter and poet, eke out meditative soundworlds from the ever-present past beneath his feet.

Heavily revolving around the protective spirit of a place (or genius loci in classical Roman religion), and the unrepeatable sense of atmosphere that comes with visiting specific sites, his debut full-length is subtly exhilarating testament to allowing milieu – the more primordial and walkable, the better – to double up as creative impetus in and of itself.

Among The Never Setting Stars is hands down one of the ambient releases of the year. How has this release stemmed from what you learned following previous, shorter releases?

Matthew Shaw: In two ways. Firstly, I set out to make an album with distinct pieces, whereas usually I would improvise or compose sections into one 30 or 40 minutes longer piece. I also wanted to make sure I refined the phrases and tones to be just right. Often the previous music I’ve made, especially the self-released music has been made very quickly and released very quickly. This one took me three years until it was ready to see the light of day.

Each track presents drawn-out drones via some sublime ambient tinkering. Take us through the recording of the music, from conception to laying down the tracks.

MS: Each piece started with a single melody line, two or three notes. I played these over and over, on different instruments and with different effects. Once I was happy with the refrain I set to how it could gradually evolve over a number of rotations. Not so short that it couldn’t develop or go anywhere nor so long it became boring. It’s quite a challenge for me to get that equation just right!

The limitation I set myself was to work with one set of sounds for each piece, no more than three elements and with a desire to reach a place between silence and something that would make me feel something.

A very important part was to read while listening, seeing what stood out while distracted with something else. Also an enormous amount of time listening while travelling, and lastly dreaming. These all informed what worked and didn’t for me, the hardest part being able to translate what that was into what was made.

Each title is a “lead into the mood the music takes on”, and collectively forms a poem across the LP. Did the poem’s composition precede the ordering of the music, and how does the poem itself reflect the nature of the release?

MS: I write every day, it’s a thing I do early each morning. I used to try drawing or sketching but found that far to impractical for me. Just not prepared enough in the morning for that. So each line tells its own story in very few words just like I hope the music can evoke a feeling in very few notes. The lines that became the titles came first. I chose one to compose to each time.

I think it must be because I’ve been so involved with film the past year or so for work and get quite obsessed about scenes where there is no dialogue and the pictures and music need to create the narrative. Usually though there is a line of dialogue that precedes that. The same idea as thought followed by action.

Namely in relation to this album, how does being based in Dorset inform your compositional style, and how you try to render topographical/environment inspiration to sound?

MS: I’ve lived in Dorset for 20 years, before I lived here I was playing drums in Riot Grrrl and punk bands. On moving here I fell into getting to know the county through visiting ancient sites, doing a lot of walking, being in the landscape. It expanded into Devon and then Cornwall in a big way. I really love the paintings by Ithell Colquhoun and her interpretation of the Cornish landscape turned into these surrealist paintings, they’re extraordinary and capture the landscape she lived in around Lamorna and Paul in Cornwall. For a few years I went there and made music in that exact place, on site. Making music that way changed the way I listened and played and composed. This album is all about bringing all that I learned through those experiences back and using it.

I get hints of Loscil, Eno circa 1983, Stars Of The Lid and more from this release, but which artists do you think have made an imprint on you approached these particular recordings?

MS: I’ve not heard Loscil, used to listen a lot to Stars Of The Lid (must dig the CDs out) and have loved Eno for a long time. The one Eno release that definitely had an effect on this album is a version of Discreet Music that may never have really happened. About ten years ago I was in hospital on a high dosage of morphine. Every night for a week I listened to Discreet Music, or I think I did. In my memory of it the phrases were playing at low volume, coming from the corridor or the next bay or a machine or something, I couldn’t get up to find out where the music was coming from. I assumed that some forward thinking medical equipment company must have used the melody for a machine to not alarm a patient or something. I swear I heard it.

Anyway, that has never really left me and so when I made this record I had that in mind. So something of the repetition of phrases here and the atmosphere has some connection to a disjointed discreet music playing all night in Poole hospital.

Brian Catling’s painting Transi doubles up as the artwork. It deals with similar themes to the album/poem – painting deals with some of the same themes, life, death, and renewal moving in cycles. How did you attempt to filter the nature of these towering, real-life themes into the music?

MS: It was unfortunately impossible to avoid. While making the album I lost three friends. All at different ages, all in very different circumstances. So there was this amazing summer shadowed by the loss of people I cared about and was sorry to lose. There was tragedy but also a great celebration of life here too, a feeling of qualities being passed on and a lot to celebrate and or the future also. So I was working through both losing friends while making new ones, losing people that had taught me and learning lessons through what life provided.

I met Brian just over a year ago and we became fast friends. I recognised in some of Brian’s paintings the same ideas and themes I was working with here for Among The Never Setting Stars. I fell in love with his work and we spent a lot of time together talking things through. This was both about real life, also though about his work, The Vorrh, which gives a fictional narrative about the same theme. I’m delighted to have permission to use this painting as the titles are reflected in the image for me.

This is Matthew Shaw’s first vinyl album, a stat which belies the healthy quickness of his CDr and tape release rate beforehand. You’ll find him on neato micro imprints like Richard Youngs’ Sonic Oyster and Susan Matthews’ Siren Wire; full disclosure/no more bluffing, his music has passed me by until Among The Never Setting Stars, but it’s stunning, beatless, ecclesiastical ambience which feels like slowly losing consciousness inside an igloo. Unobtrusive ripples of piano on ‘Cyclic Song’ are about as close as these six pieces get to ‘structure’ as your reactionary old music teacher would’ve had it; otherwise Shaw specialises in misty layers of drone, occasional deep bass rumbles and a synthesised solemnity that measures up to Popul Vuh, Stars Of The Lid, the most gaseous Gas passages and Ocean Floor. Great, too, to get fresh produce from Blackest Rainbow, once a dauntingly prolific label but recently pared down to one or two releases a year.